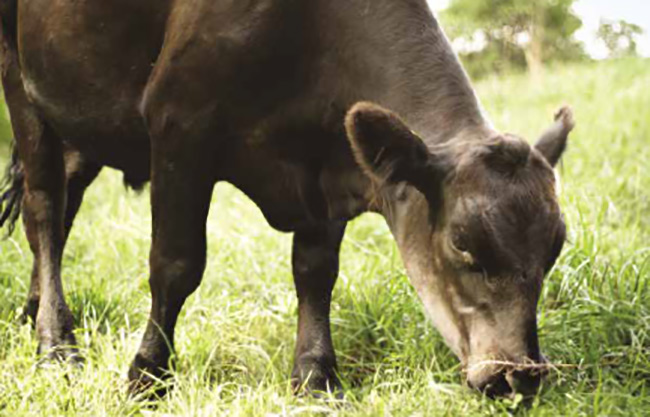 Bloat is over-distension of the rumen caused by the accumulation of fermentation gases in the rumen. Primary bloat or frothy bloat usually occurs as an outbreak in several animals on pasture containing high levels of leguminous plants, in particular clover. Secondary or gaseous bloat is rare and usually the result of a physical obstruction of oesophagus in individual animals.

In primary bloat, froth forms in the rumen and natural eructation (belching) is prevented. Without intervention, gas rapidly builds in the rumen and death can occur from the depressive effect of rumen distension on the heart and lungs or absorption of toxins from the rumen.

The main risk factor in pasture bloat is the rapid ingestion of immature/fast-growing legumes in pre-flowering stages. Bloat has long been recognized as a major problem in countries like New Zealand, where clover forms an important part of the pastures.

Ingestion of only the most succulent parts of the plant in set grazing systems is another important risk factor, while frost and growth of alfalfa at low temperatures has been shown to increase bloat risk. Research also suggests that high applications of nitrogen fertilizer can be another causal factor.

Wetness of the pasture is often cited as a risk factor, although it is more likely due to the lush forage growth brought on by wet and favorable weather.

Research suggests young animals are generally more susceptible than older animals, and that some animals are more genetically disposed to risk.

Grazing management should concentrate on pastures and animals most at risk: flush, pre-flowering, clover-rich pastures in the spring and autumn, and young animals that are kept in for the night. Close observation during at-risk periods is essential.

All personnel should be aware of risk periods and clinical symptoms. Consider establishing a routine for risk periods—for example, keep animals housed or ensure housed animals have good fiber intake (hay or silage) before turn out and before grazing at-risk pastures after milking or in the morning. Silage and hay aftermaths with a high clover content pose a high risk and cattle should be turned out onto pasture as soon as possible after cutting. Strip grazing can also help when the risk is significant, while precautionary drenching with anti-bloat agents is another option.

If clinical bloat does occur, all affected animals (including those with mild/sub-clinical symptoms) should be treated with oil or anti-bloat agents to prevent further suffering. Remove other animals immediately and provide hay or straw.

Do not attempt to drench distressed animals without a stomach tube, as this can easily lead to aspiration pneumonia. In severe cases, where the animal is lying down and death is imminent, emergency surgery (rumenotomy) by a veterinarian is essential.