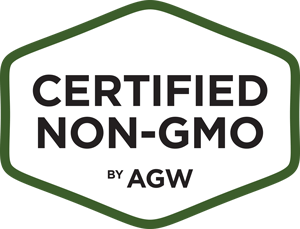 It is fair to say that most North Americans have been unwittingly eating GMO foods since the mid-1990s. According to National Geographic, around 65% of all processed foods on U.S. supermarket shelves—from pizza, chips and cookies to ice cream, salad dressing and corn syrup—contain ingredients from GMO soybeans, corn or canola.

Despite long-term public consumption of GMO foods and increased awareness and understanding of GMO technology in North America, the proportion of consumers actively avoiding GMOs has almost tripled since 2007, with 46% of consumers now saying they avoid them. According to The Hartman Group—a leading international food and beverage market research company— more than one-third say that “no GMO ingredients” is an important factor when selecting which food or beverage products to purchase.

In terms of sales and market growth, Grand View Research suggests the global non-GMO food market was worth US $947.8 million in 2018 and that the market will continue to expand at a compound annual growth rate of 16.5% between 2019 to 2025. This is not a one-off prediction: leading industry analyst Technavio also predicts the global market for non-GMO products will reach US $1.1 billion by 2023.

Today’s consumers seek out non-GMO products for a variety of reasons, including environmental sustainability and health, as well as concerns about corporate control and greater transparency in food production. But The Hartman Group suggests consumer avoidance of GMOs actually reflects a much broader shift in modern food culture, where consumers now seek food that is “closer to its natural form and less changed by human manipulation.” They want “food grown in fields by people who feel a connection to the earth, not designed and created in laboratories.” Indeed, this apparent rejection of ‘hi-tech’ sustainable solutions should trouble supporters of lab-grown meat and GMO crops working in the advocacy sector.

Environment: The potential direct and indirect environmental impacts of GMOs are a significant driver. Widespread adoption of herbicide-tolerant crops has resulted in the loss of wildlife habitat and farmland biodiversity. Predictions that GMO crops would spread beyond farmland or share genes with wild relatives have already been realized. Similarly, farmers in many regions are struggling with GMO ‘superweeds,’ some resistant to multiple herbicides. To combat resistance, the industry has released a new range of GMO crops resistant to older, more toxic herbicides such as Dicamba and 2,4-D—the very products the technology was supposed to replace. Recent research indicates that widespread use of glyphosate, the active ingredient in Monsanto’s RoundUp, may also negatively impact soil microbiology or even prevent the uptake of certain nutrients by plants.

Human health: The potential health impacts of GMOs are a key consumer concern, especially potential allergenicity and fear of other un-intended consequences of recombinant genes. Nevertheless, there is little scientific consensus that GMO foods currently present an immediate health risk and proponents keenly point to the safety record of the mass consumption of GMO crops by millions of consumers since the mid-1990s. But while the (often extreme) predictions about the health impacts of GMO technology have failed to materialize, the regulatory assumption that GMO food is ‘substantially equivalent’ to its conventional counterparts and the lack of independent, long-term safety testing of GMO crops is still highly contentious and has resulted in significant suspicion over industry influence.

Animal welfare: While the debate about GMO crops has tended to focus on potential public health and environmental impacts, the imminent mass production of GMO animals raises novel animal welfare concerns. Over the last two decades, research on GMO animals for agricultural use has increased dramatically in laboratories across the world; from chickens genetically modified for immunity to avian flu to dairy cattle engineered to express antibiotics in their milk to combat mastitis. While genetic modification does not automatically result in welfare issues for the individual animal, there is sufficient scientific evidence regarding welfare concerns associated with the application of GMO technology on livestock, as well as the ethics of genetically modifying animals simply to address problems that are either directly or indirectly the result of intensive farming systems.

Corporate distrust: Finally, consumers often cite skepticism of the agriculture/biotechnology industry as a major concern about GMO products. According to The Hartman Group, while consumers appear to accept potential benefits of GMO technology in human medicine, for example, they express concerns about the monopolization of global food and seed production by a handful of multinational corporations and view the “primary uses of GMOs as motivated by corporate self-interest and not the greater good.”

With a rapidly growing market for non-GMO products, driven by a desire for greater transparency in food production and strong evidence that many consumers are rejecting hi-tech, lab-based food solutions, it is clear there are now significant opportunities for farmers/ranchers and food processors alike to market food products using a trusted, verified non-GMO label claim.

Developed at the request of farmers and consumers seeking a meaningful non-GMO label, Certified Non-GMO by AGW guarantees food is produced without the use of genetically modified feed, supplements or ingredients, and comes from animals raised according to higher animal welfare standards using sustainable agriculture methods. Available as an ‘add-on’ certification to AGW-certified farmers and ranchers, Certified Non-GMO by AGW is the only non-GMO label that includes meaningful animal welfare standards for meat, eggs, dairy and fish. Certified Non-GMO by AGW is also available to feed producers, packaged goods and a range of other products at risk from contamination by GMO ingredients.

When it comes to making food choices, market research shows that trust and transparency are an increasingly important issues for today’s consumers. Yet other well-known non-GMO programs have set tolerance levels for GMO contamination at levels of up to 5%, as well as permitting the intentional dilution of non-GMO feed with GMO feed ingredients. Such policies will only set to undermine consumer trust in non-GMO certification. For context, the standards set by AGW are significantly more rigorous, permitting contamination at only 0.9% and forbidding any known GMO contamination.

It is clear that consumer demand for non-GMO products is only going to grow. “It’s not something that’s going away,” says Steve French, managing partner for the Natural Marketing Institute. “It’s part of this larger movement of clean label and transparency.”

For more information about Certified Non-GMO by AGW, visit agreenerworld.org/certifications/certified-nongmo-agw

We have now seen the commercial production and marketing of the first GMO animal in North America. AquaBounty’s AquAdvantage® salmon is modified to include a gene from Chinook salmon which provides the fish with the potential to grow to market size in half the time of conventional salmon. This permits shorter production cycles and increased efficiency of production. Critics fear the marketing of GMO salmon will open the flood gates to other GMO animals for human consumption, although research suggests it is likely to further heighten consumer concern.

In 2022, new U.S. laws will require the labeling of GMO food ingredients. But many foods will be exempt and food companies will also be able to use inaccessible QR codes or the little-known phrase, “bioengineered food.”

This article originally appeared in the Winter/Spring 2020 issue of AGW’s Sustainable Farming magazine.

Blog Categories
Back To Top
Search
Interested in certification? One of our coordinators will be glad to get in touch.

Your information will never be shared without your permission.