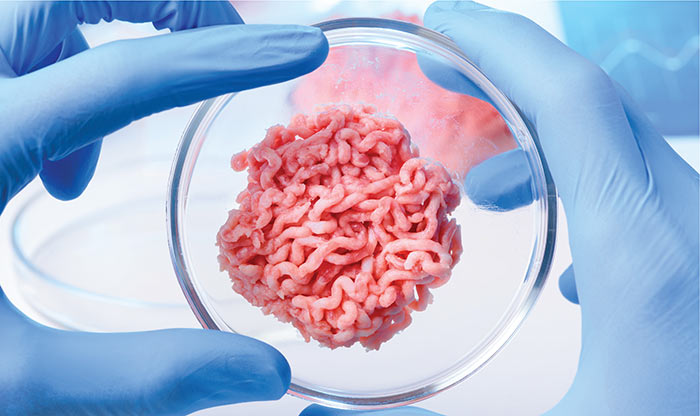 By Pat Thomas. This article was originally printed in the Spring 2019 (Volume 4 Issue 2) of Sustainable Farming magazine. To read the full issue please visit agreenerworld.org/resources/sustainablefarmingmagazine. The authors of the EAT Lancet Commission report, Food in the Anthropocene, may not have intended their work to be a polemic, but polemic it has become.

Its notion of a “great food transition” has especially outraged regenerative farmers who are working to raise healthy animals in sustainable systems. It has divided green groups into either conceding the broad brush strokes of its conclusions or picking apart its shocking lack of detail. The mainstream media’s acquiescence—as if the report’s findings had been delivered from on high—has also been a cause of significant frustration.

As the philosophical and financial interests of the groups behind the report have been uncovered, it has also raised the spectre of bias, corporate agendas and science for sale.

There are multiple unsettling aspects to the report, beginning with its dismissal of the dietary value of animal foods. Its ‘healthy’ reference diet excludes all but a daily forkful of red meat and only marginally more poultry and fish, one quarter of an egg and no dairy products at all.

Instead it suggests we seek protein from legumes—a legitimate, healthful and sustainable option as part of a balanced and diverse diet, but no substitute for animal foods.

Among its recommendations are alternative sources of protein such as lab-grown meat, insects and algae. It’s these proposed ‘solutions’, which mostly require factories rather than farms to produce, that hint at the dark corporate heart of the report.

Whether you call it cultured, in vitro or clean, the process of growing ‘meat’ in a lab remains the same: you take a cell biopsy from a living animal, extract the stem cells and grow these in a bioreactor full of growth medium—a feedstock of sugars, amino acid, salts, minerals and growth factors currently made from fetal bovine serum.

As they grow, these living cells clump together to form a ground beef-like substance. They also produce waste, mostly lactic acid and ammonia, for which no one seems to have a plan for the disposal. In addition to a feedstock derived from conventional crops, the process also consumes large amounts of energy (because the growing cells need to be kept warm) and large amounts of water (because they need to be rinsed frequently to remove waste).

This process can only make facsimile meat with none of the nutritional co-factors, including fat, found in real meat. Those co-factors have to be added—or engineered—into the final product to provide nutritional value.

The deficits of the in vitro model are so great it can only ever be an expensive and short-term distraction. Indeed, a recent analysis by British researchers at the University of Oxford (see page 5) underlines the short-termism of this approach. Scale it up and look far enough into the future, they warn, and cultured meat and cattle farms will have similar global warming potential because the methane (CH4) emissions from ruminants do not accumulate in the way that the carbon dioxide (CO2) emissions from lab meat do. This is something that should trouble the Commission, but apparently does not.

The EAT Lancet Commission also seems untroubled by the irony—but also the moral implications—of using intensively-farmed insects for food and feed while our natural world is teetering on the brink of what has been called “Insect Armageddon.”

The UN Food and Agriculture Organization suggests there are some 1,900 edible insect species and that insects form a part of the diets of around 2 billion people globally. Most of these insects are wild foraged. No human culture relies exclusively on insects for its protein requirements and for many there is a significant ‘yuck’ factor.

But the real issue, again, is that scaling up production has significant downsides. This type of “mini-livestock” may require less land, but intensively-farmed insects are also fed on conventional grains. Energy requirements are high: mealworm production systems can use as much energy as meat and milk; houseflies and black soldier flies as much as fish and soybean meals.

Since most people would not eat raw insects, a great deal of energy-hungry processing, including grinding and freeze-drying, is also required.

Bacteria to the future

It is true that blue green algae (cyanobacteria), which has an amino acid profile comparable to eggs, is eaten as a natural food by some cultures. It’s also a popular food supplement for the ‘worried well.’ The corporate vision for algae in the human diet, however, is not as a wholefood, but as the poster child for synthetic biology (synbio), a form of genetic engineering. Scientists are experimenting with re-engineering algaes and other microorganisms to become living bioreactors that produce substances they would not produce naturally. Synbio algae and other microorganisms remove farmers from the equation and take the notion of ultra-processing to a whole new level. Research is ongoing into how algae can be used to synthesize multiple food ingredients. Most of these are high-end ingredients such as saffron, cocoa, vanilla and stevia, as well as supplements like anthocyanins, beta-carotene and resveratrol.

Sustainability is complex. Regenerative farmers are leaning into this complexity, looking at whole systems, recognizing that it’s not just about energy, resources, waste and pollution, but health, well-being, tradition and culture, too. They are working with technology, logistics, social and political cohesion and the reality that genuine sustainability requires boundaries—and therefore trade-offs.

The task is made much harder by the fact that many of us are trying to reclaim sustainability in the framework of a society where the rules, structures and economic imperatives have become embedded through decades of unsustainable thinking and behavior.

Food in the Anthropocene does little to address this complexity and, in the end, many of its techno- solutions simply add more unnecessary knots to a problem that is already of Gordian proportions.

Pat Thomas is a journalist, author and campaigner specializing in the intersection of food, health and environment. Visit howlatthemoon.org.uk.

What is cultured meat? Cultured (or lab) meat is an emerging technology where animal muscle cells are produced through tissue culture in a factory or laboratory.