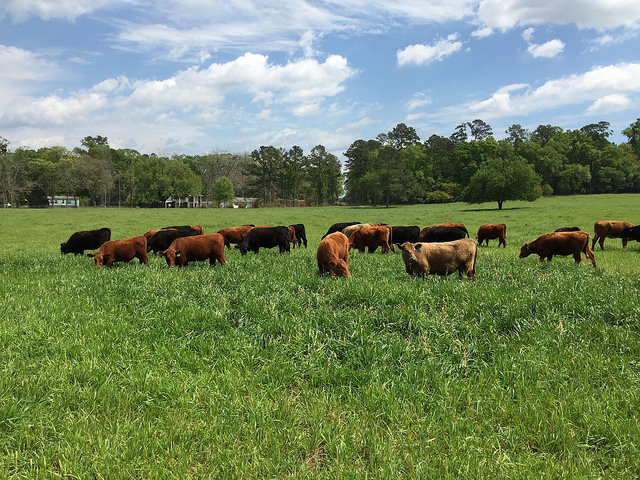 A professor at Cornell University is suggesting that shale gas and shale oil production—and not cattle—are the most likely cause of a steep increase in global methane emissions.

Robert Howarth, professor of ecology and evolutionary biology at Cornell University—and an expert on the atmospheric implications of methane—is challenging a spate of recent scientific papers that blame farmed cattle for a recent spike in global methane emissions. Instead, Howarth says methane emissions associated with the recent expansion of shale gas and shale oil production in the U.S. is the most likely culprit.

Howarth argues that satellite data shows increased global methane emissions over the last decade have mostly come from the U.S. Yet during the same period the total number of cattle in the U.S. actually decreased, “and so this cannot be the cause.” In other words, he believes there are other major methane actors here apart from cows, and he points the finger of blame at the shale gas and shale oil industry:

“By far, the most likely cause of the increase in my opinion is from shale gas and shale oil, as the increase in emissions from the U.S. indicated by the satellite data coincides closely in time with the shale gas revolution. No other major change in activities over this time period in the U.S. makes any real sense.”

Let’s get one thing straight: I am not about to use Howarth’s recent interjection as a means to deflect criticisms over the climate impact of industrial meat production, nor to claim that it’s ‘business as usual’ when it comes to eating meat.

There are no “ifs” or “buts” here: Many of us (largely, but not exclusively) in the Western world urgently need to reduce our overconsumption of meat and other food animal products—not only for the sake of the planet, but also for our individual health. The widespread adoption of a healthier, more responsible diet is absolutely fundamental to all our futures. (And I haven’t even touched on the animal welfare, human health and social justice impacts of industrial meat. That’s another—equally important—part of the argument.)

But this doesn’t mean we must all immediately stop eating meat, or that all cattle production is ‘bad.’ Leading scientists agree that food animal products can (and will) continue to make a significant contribution to future global food security, just as long as the animals are raised (and fed) sustainably. For example, it’s now widely accepted that grassfed and pasture-based ruminants have an important role in a sustainable food system because of their ability to utilize forage grown on land that cannot support human-edible crops and their potential to produce high-quality meat and milk from non-human edible crop residues.

Howarth’s point is that the widely held assumption that cattle are solely to blame for this recently identified spike in global methane emissions might not be right, and policymakers must take care not to be distracted by powerful vested interests—be they fossil fuel lobbyists or those who ultimately seek an end to meat production.

Reducing global overconsumption is absolutely vital to our future survival on this planet. But it’s not just meat: we need to look at other life choices. From recent shocking photos of the Caribbean Sea being ‘choked to death by human waste’ to reports that fertilizer runoff from crops grown for livestock feed in the Midwest caused the largest dead zone in the Gulf of Mexico on record (an area the size of New Jersey), it is abundantly clear many of us need to change our unsustainable consumption patterns, and we need to change now.

If we allow vested interests to control and dominate these debates, we risk losing sight of the multifactorial challenges that face us in working towards a more sustainable future (including food and farming). We also risk ignoring a diverse range of voices in the much-needed conversations about what sustainability really means, not to mention the highly complex, multi-faceted solutions they can offer if we are going to succeed.