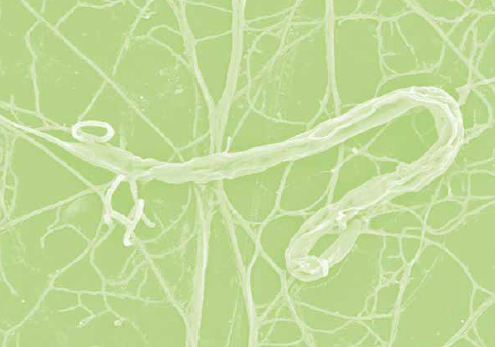 Any experienced livestock producer knows that parasites are a natural part of livestock farming. But new farmers may panic when they first realize their animal has worms, feeling they may have somehow neglected their animals. The goal should be to manage or minimize the parasites, but not eradicate them. It is important to stimulate the animal’s immune response, but not overwhelm it.  Producers should feel comfortable having a few worms on farm, but not so many as to harm animal welfare.

This article aims to explain the basic biology of some common gastrointestinal nematode parasites and outline a number of strategies to manage them, as well as dispel some myths of the commonly touted products that fail to control worms.

Gastrointestinal nematode parasites have a direct life cycle where parasite eggs are shed in the feces and distributed over the pasture. The first stage larvae develop inside the egg and hatch out within 48 hours, before developing to the second and then third infective stage (also known as L3).

The third stage infective larvae migrate out of the feces to soil and grass surfaces, where they are ingested by grazing animals. The larvae travel to the stomach or intestine where they penetrate the gut wall. Mature larvae then emerge from the gut wall and colonize the lumen of the stomach or intestine where they mature and reproduce to generate eggs. Adult worms can produce thousands of eggs per day, and can lead to significant health impacts or even death of the infected animal.

Dewormer resistance—sometimes to all classes of dewormer—is highly prevalent in the U.S. and in many countries around the world. worms in a population survive drug treatment and is a permanent genetic mutation. The more resistant the worms, the less effective the dewormer will be.  If farms are fortunate enough to have worms that are still susceptible to dewormers, these valuable tools should be used only selectively—and not on the entire flock—to keep a pool of worms un-exposed to the dewormer. Sustainable tools are described below which can be used to complement a deworming program and, in some cases, may even replace the need for dewormers.

Copper oxide wire particles or COWP (sold as Copasure® or Ultracruz®) are small particles of copper oxide delivered in a gelatin bolus (right) to alleviate copper deficiency in small ruminants. Research has shown that COWP are relatively effective against barber pole worm, although less effective against other intestinal parasites.

When COWP is combined with either albendazole (such as Valbazen®) or levamisole (such as Prohibit®), efficacy against barber pole worm and intestinal worms greatly improves.

A study conducted in Arkansas, which tends to have copper-deficient soils, showed that up to four low dose treatments could be used on lambs in one summer with liver copper levels remaining safe. Nevertheless, caution should be taken when administering any copper product to sheep (and maybe goats) as they can easily succumb to copper toxicity. COWP for parasite control should only be used in small doses (0.5—1 g in sheep and goats less than one year of age; 1—2 g in older animals) and used as needed. It is important to ensure that only copper oxide is used and not the more readily absorbed copper sulphate, which could lead to copper toxicity.

Nematode-trapping fungi, also known as predatory fungi, have potential as a biological control agent The fungi trap and destroy developing parasitic larvae in feces by creating trapping structures, which prevent larvae from migrating out of the fecal mass and onto forage, resulting in fewer larvae available to infect grazing ruminants. Duddingtonia flagrans is the fungal species available in the U.S. and must be fed to livestock to be effective. Spores survive passage through the digestive tract of ruminants and, after the animal defecates, germinate and grow in the feces to form the sticky, sophisticated loops that trap the developing parasitic larvae.

Daily feeding requires an intensive management system to ensure each animal can consume an adequate amount of the feed/spore mixture. To achieve adequate control of larvae in the feces, the spores must be fed for a period of 60 to 120 days, usually starting at the beginning of the grazing season (especially weanlings) and to dams during the peri-parturient period. Feeding studies with several livestock species (including small ruminants) have shown high reduction of larvae in feces and on pasture.

Two formulations of D. flagrans are available: BioWorma® and Livamol® with BioWorma®. For one 100 lb animal it costs about $0.60/day to feed Livamol® or $0.21/day to feed BioWorma® (requires dilution in a premix). New products are under development. For more information visit wormx.info/wormtrappingfungus.

Due to years of selection while grazing grass, sheep are generally more resistant to parasites than goats, whereas goats evolved to browse trees and shrubs away from infective parasites.

Sheep that were developed in warm, humid climates adapted to heavier parasite infection through an immune response to resist infection or become resilient. Resistant breeds include the St Croix, Barbados Blackbelly, Florida Cracker, Florida Native and Gulf Coast Native. The Katahdin is a composite breed that can be resistant, resilient or susceptible, depending on breeding objectives of their originating flock. While no specific goat breed is known to be resistant to parasites, Spanish and Kiko are often more resistant or resilient than Boer. In general, dairy goats are considered susceptible to parasites, due to selection for productive traits rather than survival.

Some plants have secondary compounds that naturally protect the plant from drought, excess water, pests and grazing; these compounds can also have bioactivity against some nematode parasites when consumed. Research shows that Sericea lespedeza, a legume forage rich in condensed tannins, can reduce the blood sucking and egg laying ability of barber pole worm, although not necessarily kill the worms. Grazing Sericea lespedeza-rich forage or providing dried hay or pellets can be one tool to reduce the infection intensity. Birdsfoot trefoil and sainfoin are other condensed tannin rich plants to aid in control of internal parasites.

It goes without saying that overgrazing should be avoided, as this can quickly lead to parasite problems, both from overdispersion of parasites and reduced nutrition to the animal.

Some farmers swear by the use of diatomaceous earth (DE) for parasite control. When DE is ingested by livestock, the microscopic shards are thought to use mechanical movements within the gut to cause injury to the outer cuticle of nematodes and ultimately lead to dehydration and death of the adult parasites. However, research literature is almost void of studies on DE against livestock parasites, and our own trials found little evidence of any reduction in fecal egg counts after feeding 2% of diet as DE for seven days.

Similarly, there is little scientific evidence of any effect of common herbal products, garlic, papaya, pumpkin seeds or ginger on the reduction of fecal egg counts or worms—or an improvement in anemia in small ruminants. It may be that continuous use of some products is necessary, or precise formulations or genetic material. Nevertheless, we believe that it is best to rely on more tried and true methods for parasite control.

None of the above strategies should be relied upon alone, but rather applied in an integrated fashion. Good pasture management (including rotational grazing and quality forages) combined with resistant livestock breeds should yield sustainable worm control. The goal, as always, is to minimize uptake of infective larvae from pastures, minimize infection and selectively treat for worms, where necessary. 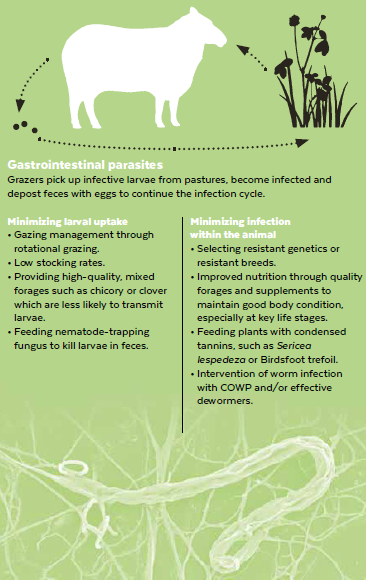