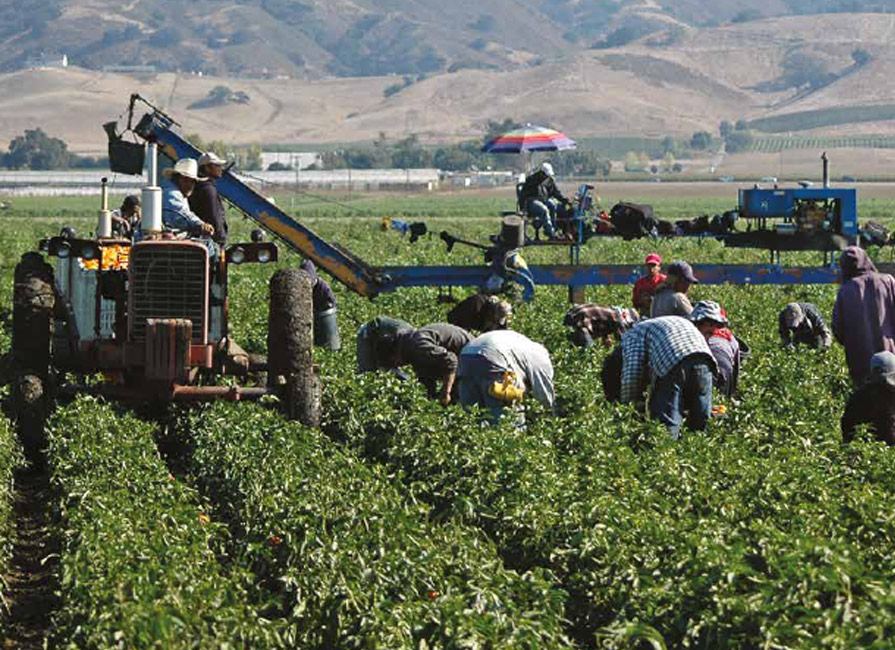 By Whitney Witthaus and Zachary Herman

As participants in or producers of sustainable food, you have already begun your deconstruction of ‘normal.’ In altering and improving your methods of production, you are not only working to protect and enhance the ecological environment and the inherent values of our landscapes, you are also ensuring we can sustainably feed the mouths of today, as well as tomorrow.

Yet if we pivot our gaze, and look back rather than forward, we see a history of injustice and inequity still left very much unaddressed by current efforts to reform agriculture.

Labor serves as the site of more potential exploitation than any arrangement of identity in human history. This worker-employer relationship is essential for the continuation of an economy where workers sell their labor to the owners of machines, property, software—the means that allow production to occur. However, excessive exploitation often occurs as a result of the drivers of competition, where business owners and employers feel under pressure to cut costs, intensify workers’ labor and reduce wages. This could be said to be true for all industries; but for the laborers in the food system, research arguably reveals an exceedingly racialized and abusive history that distinguishes the agricultural laborer from the general laborer.

At over 21.5 million workers, the food system is the largest employment sector in the U.S., with one in seven workers in the U.S. employed in one of five key segments in the sector—production, processing, distribution, retail and service. These include laborers in fields and fisheries (production), bakers and slaughterhouse workers (processing), drivers and warehouse workers (distribution), grocery store cashiers and stockers (retail), and restaurant servers, cooks, dishwashers and street vendors (servers). But while these professions are disparate and diverse, the experiences of inadequate payment and poor working conditions are all too frequently shared.

More than half of all food system workers in the U.S. make less than $10 per hour—far lower than the 2016 U.S. livable wage of $15.84 per hour. A comparable rank-and-file worker in construction, for example, can earn nearly double the wage of the typical food worker, at $17 per hour ($30,000 per year). Agriculture and food processing are consistently ranked as one of the three most dangerous occupations in the U.S. Farm workers, for example, have higher rates of toxic chemical injuries and skin disorders than any other occupational group in the country, while workers on U.S. meat processing lines are among the lowest paid, suffering deplorable and dangerous working conditions, with few rights or benefits. A report on the health of California farmworkers found that “no group of workers in America faces greater barriers in accessing basic health services.”

Of the estimated 2 to 3 million farm workers in the U.S., 68 percent were born in Mexico, with the U.S. Department of Labor reporting that 53 percent of farm workers nationally are undocumented (working without legal authorization), 25 percent are U.S. citizens, and 21 percent are legal permanent residents (green card holders). Due to the precarious immigration status of some agricultural laborers, exploitation of laborers may be both inflicted and tolerated because of threats of deportation. These statistics reveal a consistent story of working poverty that differs from all other fields of work.

Furthermore, government policy, such as the National Labor Relations Act of 1935 and the Fair Labor Standards Act of 1938, explicitly exclude farm workers, preventing the right to collectively unionize that was awarded in 1935 to all other industries (aside from domestic workers, which inhabit another highly racialized industry) and preventing overtime wages for overtime work.

Low pay has wider consequences. Today, many frontline food workers struggle simply to make ends meet. In 2010, 11 percent of food system workers were on food stamps—now known as Supplemental Nutrition Assistance Program (SNAP)—compared to 6 percent of workers in other industries. By 2016, an estimated 13 percent of all food workers—or nearly 2.8 million people—were on food stamps, compared with 6 percent across other industries. Food workers now use food stamps at 2.2 times the rate of all other industries, a tremendous increase from 1.8 times the rate of all other industries in 2010. With their workers increasingly reliant on such public assistance programs, the food industry is arguably externalizing significant costs—the payment of a living wage—to the U.S. taxpayer.

What needs to change?

The modern food industry is involved in a global race, where, actors ‘win’ (or survive long enough to continue) only when they manage to lessen the costs of production. This is done either by cutting corners with the quality or sourcing/production of materials, or by lowering the wages of their workers, generally as technology increases productivity.

As sustainable producers, however, you have already stepped away from this race at least once, swimming against the tide of industrialization and producing food in a way that not only minimizes the impact on the wider environment, but has the potential to keep carbon in the ground and help to mitigate our changing climate.

But it is now time for another change: to ensure that sustainable agriculture does for food workers what it does for the soil, water and air, and the health and wellbeing of consumers who are able to buy it. Living wages, dignity and the ability to organize legally are needed today.

It can be done

The emerging alternative food movement has shown the wider industry that it is not only possible to introduce new values to the food chain, but that these values can ripple and begin to change everything. This movement defies the logic of capital, and is a vital inroad to social change because of it. It used to be impossible to compete in the market without using industrial methods, such as confinement operations. Yet you do it every day.

We know that growing numbers of consumers are finding out how their food is produced, and they are willing and eager to pay more for food that meets their values. Changing ‘normal’ for agricultural workers is possible, and sustainable farmers and food businesses have a chance to lead the way. For example, Tim Cochran of Swanton Berry Farm in California has already rewritten impossible three times: First, by growing strawberries without pesticides (America’s first organic strawberry); secondly, by voluntarily inviting the unionization of his workers, who are represented by the United Farm Workers; and lastly by offering his workers dental and medical benefits, vacation pay and pension plans.

To change the cycle of exploitation, new values must be added to our collective understanding of what ‘sustainable food’ really means—namely the wellbeing and working conditions of agricultural and food laborers. This is not only fundamentally right, it’s absolutely achievable.

Just as trusted farm certifications can offer premiums for the sustainable farmer, there are market-based incentives for improving working conditions and wages for agricultural laborers, too.

The Good Food Purchasing Program (GFPP) is an innovative new policy initiative that looks to change the way public institutions purchase food. The five key values of the GFPP require that all food should prioritize animal welfare, nutrition, environmental sustainability, local economies, and finally, a valued workforce. Created by the Los Angeles Food Policy Council, the GFPP is now a national program and is an important starting point to encourage improved practices and shifts in the food system.

The GFPP policy can be adopted at various levels and scales, with varying budgets and capacities, and has already been formally adopted by six major public institutions in Los Angeles, San Francisco, Oakland and Chicago. Elsewhere, groups are actively lobbying to make the GFPP a priority in Washington,D.C., Cincinnati, New York City and Twin Cities (Minneapolis/St. Paul). These early adoptions leverage multi-million-dollar budgets to change industry norms and allowances, as lucrative purchasing contracts with governments are made available to producers who are doing things very differently than the major corporate entities like Tyson, Ameristar and others. Governments, which are legally bound to the protection of public and environmental health, can be made accountable to the people they serve. This is apparent in the signal sent by GFPP: a transition toward purchasing based on values, not solely profit or minimizing costs.

Sustainable producers are in a position—particularly as members of producer groups or other marketing groups—to take advantage of this industry change, being ready to bid for GFPP contracts when they arrive in cities near you. Many of you already meet (and most likely exceed) the standards of nutrition, animal welfare, local economies and sustainability. However, you may not yet meet labor standards of the valued workforce.

The Food Chain Workers Alliance, in partnership with Restaurant Opportunities Centers (ROC) United, is performing research on restaurants that hold fair labor as a key aspect of their operations. For the 200 restaurants in ROC’s Restaurants Advancing Industry Standards in Employment (RAISE) program, early results suggests that, as well as being concerned with sourcing environmentally sustainable food, restaurants are increasingly looking to source food produced with fair labor practices.

By focusing on environmental sustainability and good animal welfare, many farmers may feel they have already redefined their agricultural production. That niche can be cozy; and it is also fair to say that becoming part of a revolutionary movement towards overhauling and redefining ways of managing labor could be uncomfortable and challenging. However, we cannot sit on our (sustainable) laurels. Organic production may have originated from a refusal to accept the ‘norms’ of industrial agriculture. Yet despite the advances in environmental management we might expect, researchers and journalists alike have found that the end result on some organic farms—particularly the larger operations—has been increased exploitation and lower wages for agricultural workers. Not what many conscientious consumers would imagine.

This is not just about doing what is right. As the GFPP shows, there can be a reward—and an outlet for your products—from implementing a new set of realities for the conditions and wages of farm labor. Where GFPP and RAISE lead, others will follow. Working together, we can—and will—redefine normal when it comes to the employment of agricultural laborers, and claim the mantle of true sustainable production.

Founded in 2009, the Food Chain Workers Alliance (FCWA) is a coalition of worker-based organizations whose members plant, harvest, process, pack, transport, prepare, serve and sell food; organizing to improve wages and working conditions for all workers along the food chain. The Alliance works together to build a more sustainable food system that respects workers’ rights, based on the principles of social, environmental and racial justice, in which everyone has access to healthy and affordable food. Currently, FCWA has 31 members representing roughly 340,000 food workers in the U.S. and Canada. foodchainworkers.org

Whitney Witthaus and Zachary Herman write for The Food Chain Workers Alliance. Full references/statistics for this article are available on request.