You’ve probably heard claims that industrial or intensive livestock farming is the most “environmentally-friendly” way to produce meat–particularly beef.

The argument goes like this: Confining many thousands of cattle on dirt feedlots and feeding a grain-based diet (rather than grazing pasture) increases production efficiency. Grain-fed cattle reach slaughter weight quicker than when fed grass or forage, reducing the amount of the key greenhouse gas, methane, that’s emitted per pound of beef produced. Some people claim the only way we can feed the growing global appetite for animal protein–and avoid the potentially catastrophic methane emissions associated with grassfed and grass-finished livestock–is to expand and intensify livestock production. Sounds plausible, right? 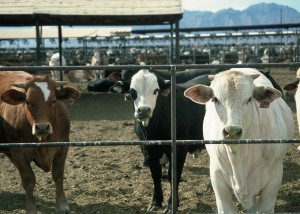 The problem is this argument strongly conflicts with the scientific evidence that pasture-based farming systems–especially those involving cattle and sheep–have a far better environmental profile when it comes to total GHG emissions.

If you look solely at the direct methane gas emitted by individual cattle during their lifetime, data show that pastured or grassfed cattle produce more of this particular GHG than intensive feedlot cattle systems. Yet proponents of intensive farming conveniently ignore the total GHG emissions associated with intensive beef production–including emissions from the production and transport of vast quantities of grain-based feed consumed by the millions of feedlot cattle each year.

It’s now widely accepted that intensive cattle feedlots and other confinement livestock systems are responsible for the vast majority of agriculture’s total GHG emissions. This criticism doesn’t just come from environmental groups. A report from the U.S. National Research Council (USNRC), for example, states that U.S. intensive agriculture is the nation’s largest contributor of the important greenhouse gases, nitrous oxide and methane.

Nitrous oxide is the most potent GHG, with the ability to absorb 310 times more heat per molecule than carbon dioxide. One of the biggest sources of nitrous oxide in agriculture is the manufacture and use of nitrogen-based fertilizers. Indeed, the U.S. Energy Information Administration indicates that the majority (87%) of agricultural emissions result from the manufacture and application of nitrogen fertilizer to soils to grow grain, such as corn and soy (the remaining 13% comes from the management of animal waste).

Methane is not only released by grassfed or pasture-raised cattle. This key GHG is also produced during the bacterial decomposition of livestock manure where there is no free oxygen present (anaerobic conditions). Research reveals anaerobic conditions are far more likely to occur when large numbers of animals are managed in a confined area and where manure is stored in vast open lagoons, such as cattle feedlots or industrial indoor pig and poultry farms. What’s more, the USNRC states that “manure from animals fed with grain-based, high energy diets is more degradable and has higher methane production potential than manure from animals fed with a roughage diet,” a fact rarely recognized by proponents of industrial farming.

Across the world, the rapid expansion of intensive livestock production is also leading to massive deforestation—and the associated carbon dioxide emissions—as forests are cut down and cleared to provide more pasture to graze livestock or grow livestock feed. 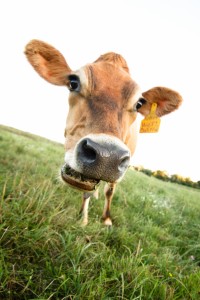 Put simply, a shift to pasture-based and grassfed livestock systems would be far better for the planet. Leading researchers now believe that well-managed livestock grazing systems—as advocated by AGW—have a potentially vital role to play in helping to cut global GHG emissions by capturing atmospheric carbon dioxide (CO2) and locking it underground through carbon sequestration.

Carbon sequestration is a naturally occurring process where CO2 is transferred from the atmosphere into the soil through crop residues and other organic solids. As cattle and other ruminants graze and naturally fertilize pasture, this stimulates grasses to produce more leaves and root mass. As the grass grows, it absorbs more CO2, which is eventually converted through complex biological processes into a stable form of carbon within the soil, where it can remain for centuries (if left undisturbed).

If this carbon storage role is taken into account, some researchers found that pasture-raised beef cattle had 15% lower emissions than their feedlot cousins. Accurately quantifying how much soil carbon sequestration contributes is difficult, and it can vary dramatically from place to place. But one thing is for sure: when it comes to climate change, pasture-based or grassfed cattle systems can no longer be disregarded as the less environmentally friendly option.

When comparing GHG emissions in industrial and pasture-raised pigs and poultry systems, however, the picture isn’t as clear-cut. Even pasture-raised pigs and chickens need some grain to eat, as these animals cannot obtain all their dietary requirements from pasture alone. Of course, a lot depends on how this grain is produced, how much fertilizer is used and so on. But when you look beyond GHG emissions and start to consider other important issues—such as the impact of industrial farming on animal welfare, environmental pollution and human health—the benefits of pasture-based systems for all livestock species become much clearer.

Find out how your daily food choices can help fix our broken food system here!