Scientists predict that water demand for food production could triple by 2050, putting immense pressure on the world’s freshwater resources

Around 90% of the water we consume is ‘hidden’ in the food we eat. It’s the water used to grow, produce and process our food before it even enters our kitchens. Scientists refer to this as “virtual water” and estimate that agriculture is responsible for around 80% of all water consumed in the U.S.

When you take this virtual water into account, the average person consumes over 900 gallons of water a day. With the ever-increasing demand for food, some scientists predict that demand for water in food production could triple by 2050, putting immense pressure on the world’s already limited freshwater resources.

Meat production has come under the spotlight in recent years for its associated water use, with frequent drought conditions raising concerns about finite water supplies. It’s generally accepted that fruit and vegetable production uses considerably less water than meat production. For example, one pound of wheat uses approximately 220 gallons of water, while soy requires 260 gallons per pound to produce.

In the discussions about water use and food production, beef is frequently presented as ‘the bad guy.’ Commentators claim that producing one pound of boneless beef requires anywhere from 440 gallons to over 12,000 gallons of water, from field to plate. We’re talking about water used to grow grass and forage and grain that most beef cattle eat–including rainwater and water used for crop irrigation; the water the cattle drink; and finally water used to process the meat. There is still a lot of debate about the accuracy of common water use figures–for example, the lowest and highest figures for beef cited above tend to be used by both proponents and opponents of meat consumption, respectively!

However, the most widely cited figures—produced by the respected Water Footprint Network (WFN)—suggest it takes around 1,800 gallons of water to produce one pound of boneless beef. According to the WFN, pork fares a little better at 720 gallons/pound; goat at 660 gallons/pound; and chicken at 520 gallons/pound. But these are still significant quantities when compared to most vegetable production, for example. As a result, many people question the sustainability of meat production and consumption, particularly beef.

But Is All Beef the Same? 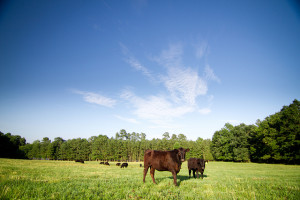 The WFN’s water use statistics are all based on industrial livestock production, not grassfed or pasture-based systems. When it comes to beef, the figure of 1,800 gallons of water relates to beef feedlot systems, where cattle are confined and fed a high-grain finishing diet–and that grain needs a lot of water to grow.

In fact, the WFN specifically states that “grazing systems are preferable over industrial production systems from a water resources point of view,” not only in terms of overall water usage, but also the pollution threat that industrial livestock systems pose to freshwater from the vast amounts of concentrated manure produced, as well as the application and leaching of fertilizers and pesticides in feed crop production.

Although specific data for water use in pasture-based or grassfed cattle systems isn’t yet available, it is likely to be significantly less than 1,800 gallons per pound of grassfed beef. In other words, saying we need “1,800 gallons of water to produce one pound of beef” without acknowledging any differences between production systems is doing a real disservice to grassfed and pasture-raised beef.

Fruit, Vegetables and Water Use 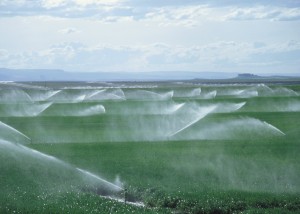 While WFN data on water use suggest “it is more water-efficient to obtain calories, protein and fat through crop products than animal products,” we must ask whether continuing to grow premium crops—including fruit and nuts—in systems that are reliant on water abstraction from aquifers simply to satisfy consumer demand for year-round supply really represents a wise use of precious groundwater resources. “Climate conditions have exposed our house of cards,” Jay Famiglietti, a NASA scientist in Pasadena who studies water supplies in California and elsewhere, recently told the New York Times. “The withdrawals far outstrip the replenishment. We can’t keep doing this.” Industrial crop production can also present significant environmental pollution threats to water supplies from excessive fertilizers and pesticide use.

The important take away here is this: If you care about water conservation and you want to eat meat and animal products, leading research shows that pasture-based livestock systems use less ground- and surface-water resources (and generally rely much more on rainfall than irrigated water) and offer a very minimal pollution risk when compared to industrial livestock systems. Perhaps the most important consideration is that where rainwater falls on grassland that would be otherwise unsuitable for crop production, pasture-raised cattle (or sheep, goats or bison) still represent the most efficient—if not the only—way to produce nutritious food from this land. Remember: rain will still fall on grassland (or any land, for that matter) whether the farmed livestock are there to graze or not. When you choose meat and livestock products from pasture-based or grassfed systems you are supporting a far more water-friendly production system.

While some reports indicate it might take less water to produce a pound of pork or chicken compared to industrial beef, it is important to remember that WFN data clearly shows that “animal farming puts the lowest pressure on freshwater systems when dominantly based on crop residues, waste and roughages.” In other words, when it comes to water use, grassfed and pasture-based systems are still the best choice. But there are also wider considerations. For example, we know industrial poultry and pork systems create huge quantities of toxic waste that not only present a significant pollution threat to water sources, but results in vast greenhouse gas emissions. Just like feedlot beef cattle, industrial pigs and chickens are wholly reliant on a high-grain diet—and that grain needs a lot of water to grow, frequently abstracted from river, wells and other water sources. And we know all industrial livestock systems raise big questions about animal welfare and human health (think antibiotic abuse).

Most pigs, poultry and cattle in the U.S. are confined indoors or on dirt feedlots in cramped, stressful and often unsanitary conditions…

Find out how your daily food choices can help fix our food system here!