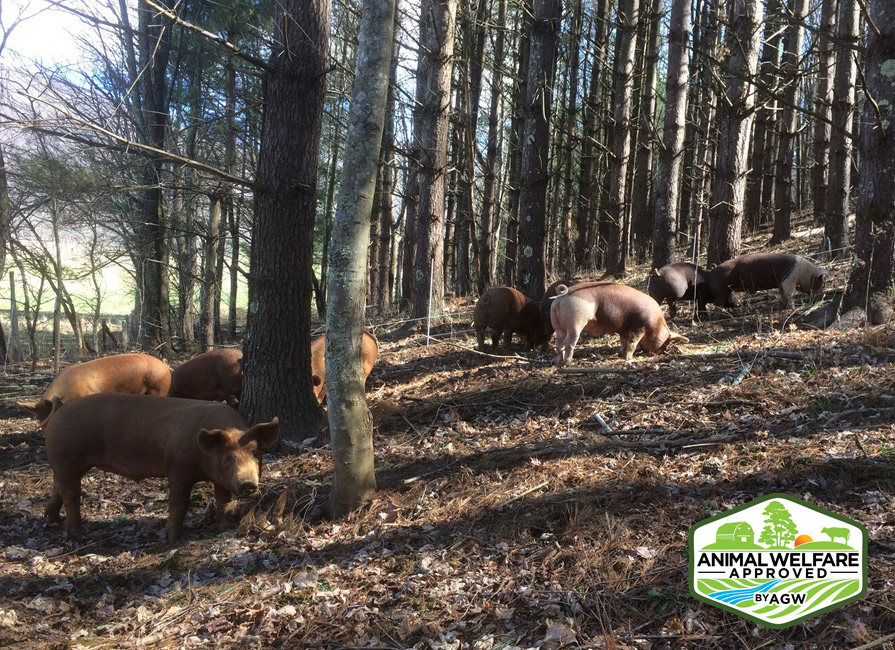 Holly Whitesides and Andy Bryant are first generation famers raising Certified Animal Welfare Approved by A Greener World (AGW) pigs and beef cattle at Against the Grain Farm in Zionville, North Carolina. Holly became interested in farming in college, where she was inspired to become actively involved in doing something about the state of the food system. Andy and Holly gained farm experience individually before farming together for seven years. In 2012, they purchased the initial 18 acres of Against the Grain Farm. Over the years, they gradually increased their acreage, and 2021 marks their tenth growing season on the farm. “It’s a typical mountain farm,” Holly explains. “The land is diverse, with some flat, tillable land along with mixed pasture and woods of varying degrees of slope and steepness.” Andy and Holly and their family are joined on the farm by several farm interns.

Since purchasing the land, Holly and Andy have worked hard to develop the farm, which was farmed intensively in the past. “Our vegetables and land are certified organic and Biodynamic,” Holly explains. Over the last decade, the couple has purposefully diversified into animals as part of a holistic farming approach. “The farm is on clay soil and has produced tobacco, cattle and hay in the past under an extractive model of agriculture. We’ve shifted toward a regenerative model and animals are a big part of that. Our focus is on re-building the soil. It’s the regulator, mediator and balancer of life on the farm, and the animals play a vital role in helping to complete the recycling of nutrients back to the soil.”

Andy and Holly manage Certified Animal Welfare Approved by AGW pigs and beef cattle at Against the Grain Farm. “The pigs are a mix of breeds,” says Holly, “a little Old Spot with a mix of Hereford, Hampshire and Yorkshire.” The pigs are also raised outdoors on pasture or range, where they are free to root and forage as pigs naturally do. The herd of beef cattle are rotationally managed, grazing one section of pasture before being moved to fresh fields. This type of management allows grass to recover before cows return to graze again; it also keeps the soil properly fertilized and minimizes the build-up of internal parasites, thereby avoiding reliance on chemical treatments.

For Andy and Holly, observation is one of the most important aspects of their animal husbandry practices, as well as providing clean water and good land and pasture management. “Taking a few moments during a daily chore to really observe the animals is the key to good management,” says Holly. “The animals have constant access to pasture or range, sunshine and fresh air, and pasture-based management does a lot for parasite management and nutrition.”

As Holly explains, rotating the animals on the pasture is not just beneficial to the animals: “The land also benefits from this cycle of rest and disturbance. When you manage animals on a landscape outdoors, assuming they’re not overstocked, the land can really take care of the animals and mediate a lot of issues that are present when raising animals in confinement.”

Andy and Holly chose to pursue AGW certification for multiple reasons: “We’re in a pretty active local food movement area, and we knew we were already managing our animals and farm in a way that met AGW standards,” Holly explains. “It’s also important to show customers a third-party verification, and we saw AGW certification as a way to set ourselves apart and really highlight what we’re already doing on our farm as far as animal husbandry practices are concerned. AGW was a good alternative for us and our animals, because AGW standards are realistic yet stringent enough to make it worthwhile.”

In the future, Andy and Holly want the small farm family to be financially sustainable, too. “Looking more long term, we want to be in relationship with our farm and land that we live and grown on—to enable and foster a healing process,” Holly explains. “If I really step back, that’s the long-term goal, and I trust the financial piece will come.”

AGW-certified products from Against the Grain Farm are available through the farm’s Meat CSA and at several outlets in the area. Check the AGW directory for details. For more information about Against the Grain Farm, visit www.atgfarm.com or visit the farm’s Facebook and Instagram pages. Contact Andy and Holly at atgfarm@gmail.com and 828-406-4439.