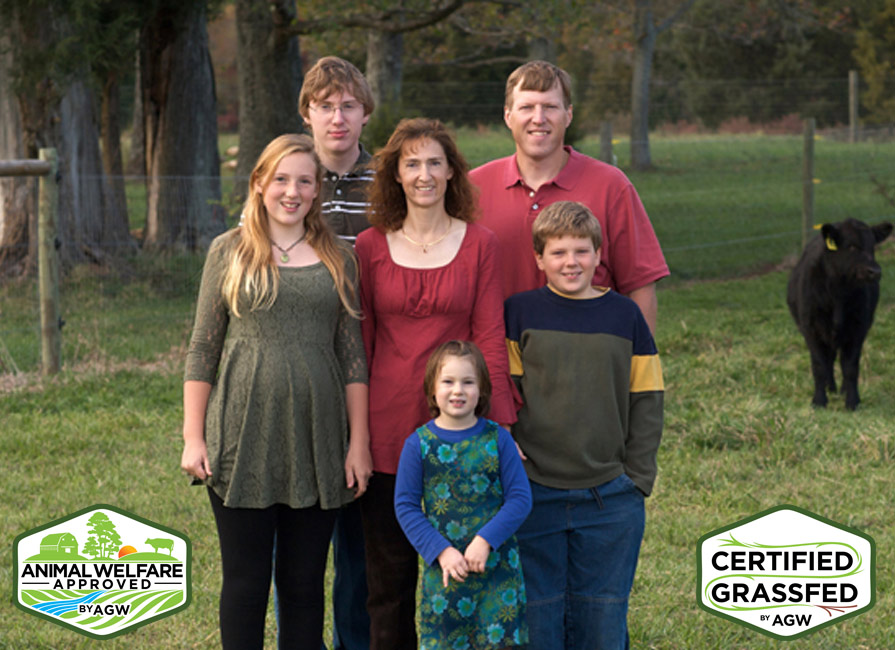 Kimberly and Brian Harry raise Certified Animal Welfare Approved by A Greener World (AGW) laying hens, laying ducks, pigs and Certified Grassfed by AGW beef cattle at Minka Farm in Efland, North Carolina. Located in Orange County, the farm was a cattle dairy farm from the 1940s until the 1980s and was then used as a multipurpose farm. When Kimberly and Brian acquired the land in 2007, much of the infrastructure was already in place, but the land had been intensively grazed for decades and the soil was severely depleted. Kimberly and Brian are highly committed to running a sustainable, high-welfare operation; so, through soil testing and careful land management along with rotational grazing strategies to encourage mixed forages to grow, they are restoring the natural fertility of the soil.

Brian and Kimberly’s flock of Certified Animal Welfare Approved by AGW laying hens, which include Rhode Island Reds, Americaunas and Delawares, are raised outdoors on pasture where they can perform natural behaviors like running, dust bathing, pecking and scratching for grubs and seeds. Pasture-based management not only provides the highest welfare conditions for the hens, but also produces healthier eggs containing three times as much vitamin E, seven times more beta-carotene, and twice the omega-3 fatty acids as industrial eggs.

Brian and Kimberly also raise Certified Animal Welfare Approved by AGW Khaki Campbell laying ducks. Originating in England in the late 1800s, the Khaki Campbell is known as a reliable layer of high-quality, white-shelled eggs and, as an active forager, is well-suited for pasture-based production.

The Certified Animal Welfare Approved by AGW pigs at Minka Farm are raised outdoors on pasture and range, where they are free to root and forage as pigs naturally do. This high-welfare management is a fundamental component of AGW certification and is known to have environmental, nutritional, and culinary benefits.

The Harrys also manage a herd of Angus mix cattle.  They recently introduced a Senepol bull to the herd of cattle because the breed is known to perform particularly well in a grass-based system. In 2015, Minka Farm became the fourth farm in the state of North Carolina to be Certified Grassfed by AGW for their beef cattle. This is the only certification and food label in the U.S. and Canada that guarantees food products come from animals fed a 100 percent grass and forage diet, raised entirely outdoors on pasture or range, and managed according to the highest welfare and environmental standards on an independent family farm. The cattle are rotationally managed, grazing one section of pasture before being moved to fresh fields. This allows grass to fully recover before the cattle return to graze again; it also keeps the soil properly fertilized and minimizes the build-up of internal parasites, thereby avoiding reliance on chemical treatments.

All of Minka Farm’s animals are raised outside on pasture year-round. They are fed a 100 percent vegetarian diet, and no pesticides or herbicides are used on the farm’s grass. “As a family, we decided that a strong connection to the land and a good work ethic are important for us,” the Harrys say. “We are constantly learning about how best to keep our soil healthy and our animals happy while we produce food for ourselves and our customers.”

Minka Farm was a 2011-2012 AWA Good Husbandry Grant recipient, and the grant enabled Kimberly and Brian to build a small-scale local hatchery where they hatch traditional breed chickens and ducks to order as well as hatching replacements for their own flocks.

Certified Grassfed by AGW beef and Certified Animal Welfare Approved by AGW duck and chicken eggs and pork from Minka Farm are available at various retail outlets around North Carolina. Check the AGW directory for details. For more information about Minka Farm, visit the farm’s Facebook page, Instagram or website at www.minkafarm.com.