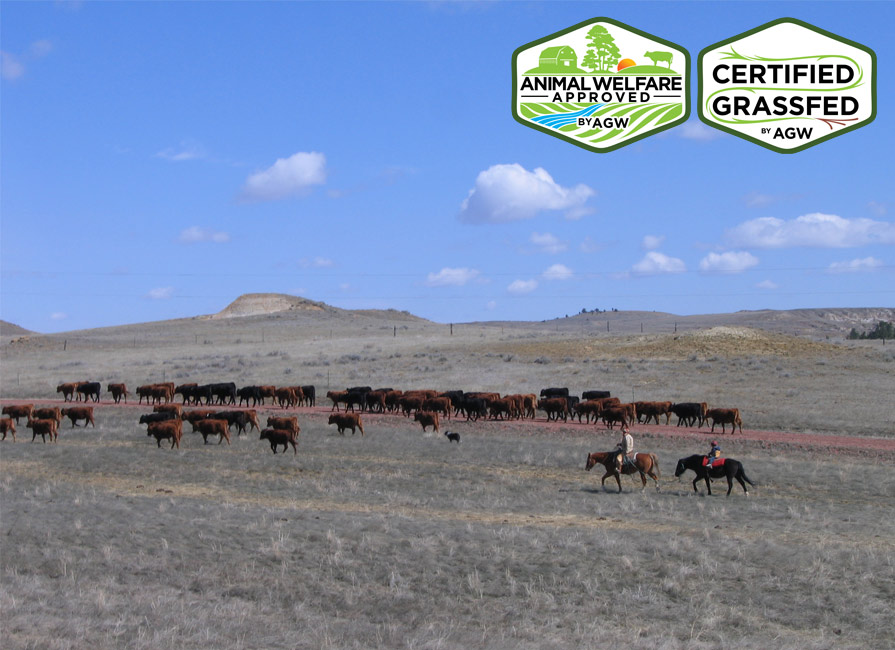 Christy and Patrick Lohof raise 65 Red Angus-based beef cattle near Otter, Montana. The cattle run on 3,000 acres of rolling rangeland at 3,700 feet elevation. While some grasses were seeded in the 1960s, most of the grassland is made up of hardy native species that thrive in the temperature and precipitation extremes of eastern Montana. The Lohof’s cattle are equally well-adapted to this rugged landscape.

All the cattle raised on the ranch are sold under the LOHOF Grass-Finished BEEF brand. Through careful breeding, Christy and Patrick have selected animals for the hardiness that their herd now exhibits, although Christy notes the Red Angus breed is already extremely well-suited for their climate since it was originally developed just 60 miles from the ranch. The Lohof’s cattle are moderately framed with a good disposition, which makes for easy handling, weaning and processing.

Genetics are just one important aspect of producing high-quality, healthy beef: The Lohofs also ensure their cattle are raised outdoors on pasture and only fed local grass hay when grazing isn’t possible–they never receive grain in their diet. The Lohofs believe the meat quality is strongly influenced by the diverse, high-protein grasslands of Montana, which have been famous for raising beef since the days of big cattle drives from Texas in the 1870s. “About a decade ago,” says Christy, “we realized that our beef was truly unique and we began selling it directly to customers.” They identify this uniqueness as resulting from the land’s “terrior,” a French word referring to a set of unique influences that the geography, geology, and climate of a certain place has on the production of a food product, such as wine, cheese or beef.

The importance that the Lohofs place on pasture management led them to apply to the Certified Animal Welfare Approved by A Greener World (AGW) program in 2014: “We really liked the technical sheets that the program provides and found the philosophy to be consistent with our own, so getting certification for the herd was logical,” Christy explains.

In 2015, LOHOF Grass-Finished BEEF became the first beef producers in the state of Montana to become Ceritfied Grassfed by AGW, the only certification and logo in the U.S. and Canada that guarantees food products come from animals fed a 100% grass and forage diet, raised outdoors on pasture or range for their entire lives, and managed according to the highest welfare and environmental standards on an independent farm. “When we got Certified Animal Welfare Approved by AGW certification we were really surprised at just how many of our established grassfed beef customers were genuinely excited to know our welfare practices were being verified by a trusted third party. So, becoming Certified Grassfed by AGW seemed like a natural extension. Now that our meat is in Sheridan retailers, having a label that certifies that we’re grassfed and high welfare is so important, because customers who don’t know us can look at the seal and feel assured the beef meets the highest welfare and environmental standards in the U.S.”

Christy and Patrick look forward to meeting the increasing demand for high-welfare, sustainably-produced beef by continuing to improve their management techniques and their land’s carrying capacity. Certified Animal Welfare Approved by AGW, Certified Grassfed by AGW beef from LOHOF Grass-Finished BEEF is available at farmers’ markets and grocery stores in Sheridan, WY, as well as direct from the ranch. Christy and Patrick deliver free of charge to Sheridan and Miles City, MT. For prices and information, visit lohofgrassfinishedbeef.com, or contact the Lohofs at lohofmeats@gmail.com or 406-784-2549. Follow the farm on Facebook.