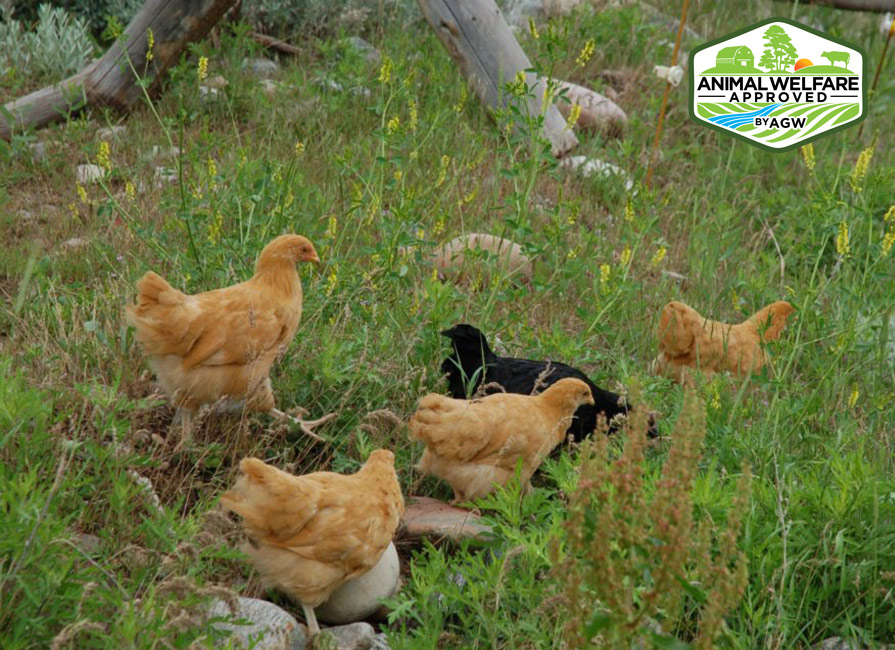 Robert and Suzie Radtke raise Certified Animal Welfare Approved by A Greener World (AGW) laying hens at River Rock Family Farm, which was established in South Weber and moved to Willard, Utah in 2014. Robert and Suzie are dedicated to raising their animals with respect and according to the highest welfare and environmental standards.

The poultry at River Rock Family Farm consist of several traditional and rare breeds of chickens, such as Light and Silver Sussex, Barred Rock, Ameraucana and Black Copper Marans. Robert and Suzie believe there is value and merit in preserving traditional livestock breeds. Most of the breeds that Robert and Suzie choose to raise on the farm are headed for extinction because current industrial farming systems don’t value breeds that lay less than 280 eggs a year. Laying eggs at this rate, however, produces serious welfare issues for poultry and this is one of the reasons that Robert and Suzie have chosen to continue breeding birds that have lower laying rates, but thrive in a pastured-based system. The birds have freedom to roam and explore all over the farm. In return for such a healthy, stress-free lifestyle, they provide beautiful, delicious and nutritious eggs. The variety of breeds result in many different types and sizes of eggs, with a beautiful array of colors which are very popular with customers.

In 2011, Robert and Suzie received a Good Husbandry grant from the Certified Animal Welfare Approved by AGW program, which has helped them to develop on-farm breeding program to expand the numbers of some of the rarer breeds they raise. With the money they received, they were able to purchase an incubator, build a brooding house and improve fencing. When River Rock Family Farm moved to their new location in Willard, they began constructing a new brooding house, which will incorporate the incubator and other equipment purchased from their Certified Animal Welfare Approved by AGW grant.

Certified Animal Welfare Approved by AGW pasture-raised chicken eggs from River Rock Family Farm are available direct from the farm or at local grocery stores. To learn more, contact Robert and Suzie at 801-660-0724 or riverrockfamilyfarm@gmail.com. Follow them on Facebook.