People who work in U.S. meat processing industries are among the lowest paid, with few rights or benefits—despite often difficult, dangerous working conditions

Industrial livestock production isn’t just damaging the environment, animal welfare or our health. It also negatively impacts the people who raise and process the livestock for us.

Although these corporations claim to represent America’s independent ‘family farms,’ the reality is that many farming businesses working under industry contracts have very little—if any—control over how the animals are managed, who they sell them to and for how much. Today, most pig and poultry farmers are forced to operate under strict “captive supply” contracts, where the livestock are either owned outright by a corporation or where their day-to-day management is strictly controlled.

Far from being independent, most farmers who raise pigs or poultry for the likes of Smithfield, Tyson or Perdue have no say over major decisions about day-to-day management, medicine use, feeding, breeding, financing, slaughter and marketing. Under these contracts, the meat packers own all the pigs or birds, as well as the feed and medicines. The farmer raises the animals on behalf of the corporation, and must provide barns, equipment and labor; they must also pay for electricity and water and, of course, the disposal of all fecal waste and dead animals.

As outlined in Wenonah Hauter’s excellent book, Foodopoly, the agricultural sector has changed dramatically over the last 20 years. In 1993, 87% of U.S. pig sales were negotiated on the spot market between individual farmers and meat processors, giving farmers some negotiating power with the larger corporations. By 2006, however, 90% of all pigs were controlled by the major meat processors, either by owning the pigs outright or through captive contracts, driving prices paid to farmers ever downwards.

Today, 98% of U.S. chicken is produced under contract. The average poultry farmer makes just $15,000 a year—assuming that no wages are paid for family day-to-day labor. From every sale of a 12-piece KFC chicken meal at $26.99, the Contract Poultry Growers Association claims the chicken farmer receives a paltry 25 cents.

These contracts can also force farmers to obtain huge loans to build or upgrade their facilities, often costing many hundreds of thousands of dollars, making the farmer even more dependent on the corporation to pay off the loans—and therefore open to manipulation and abuse. The Contract Poultry Growers Association claims many poultry producers are often too fearful of losing their business if they speak out about maltreatment by the meat companies. (Watch the video below to learn more about the plight of modern poultry producers.) 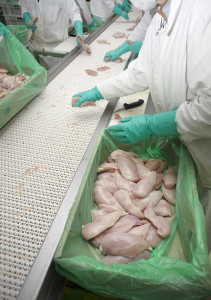 These problems are not confined to the farmers alone. Those who work in U.S. meat processing industries are among the lowest paid, with few rights or benefits—despite often deplorable and dangerous working conditions. According to a 2005 Government Accountability Office report, the meat and poultry processing industry has one of the highest rates of injury and illness of any industry, “with hazardous conditions involving loud noise, sharp tools, and dangerous machinery.” Common injuries include cuts, strains, cumulative trauma caused by repetitive cutting motions, and injuries sustained from falls, as well as more serious injuries, such as fractures and amputation. Workers also become ill because of exposure to chemicals, blood and fecal matter, exacerbated by poor ventilation and extreme temperatures.

Sadly, things clearly haven’t improved since then. In 2013, the Southern Poverty Law Center and Alabama Appleseed surveyed employees at 20 poultry plants owned by eight different companies in north Alabama. Modern line workers can make up to 20,000 repetitive movements in a single shift, using dangerous equipment and machinery. As a result, nearly three-quarters of the poultry workers interviewed described suffering some type of significant work-related injury or illness, including debilitating repetitive motion injuries in their hands, as well as cuts, chemical burns and respiratory problems. Similar issues are found at meat processing plants across the U.S.

So how can we address these wider socio-economic issues? Supporting regionalized food systems—with truly independent farmers and food processors that are more closely integrated within their local communities—is a good place to start.

AGW’s farm programs are only open to independent farmers who own their animals and are responsible for their day-to-day management and care. Research shows that independent farms are more beneficial for the rural economy, as they are more likely to spend their dollars locally. Every time money changes hands within a community it boosts income and economic activity, and fuels job creation—known as the local multiplier effect.

While “big farms” are certainly not always “bad,” it stands to reason that independent farmers who aren’t beholden to the whims of corporations, who own and are directly responsible for the management of their livestock and land, and who serve and employ local people are more likely to be invested in the well-being of their animals, their local environment and their local communities.

Industrial farming is harming one of the most important resources of all: our soil…

Find out how your daily food choices can help fix our food system here!