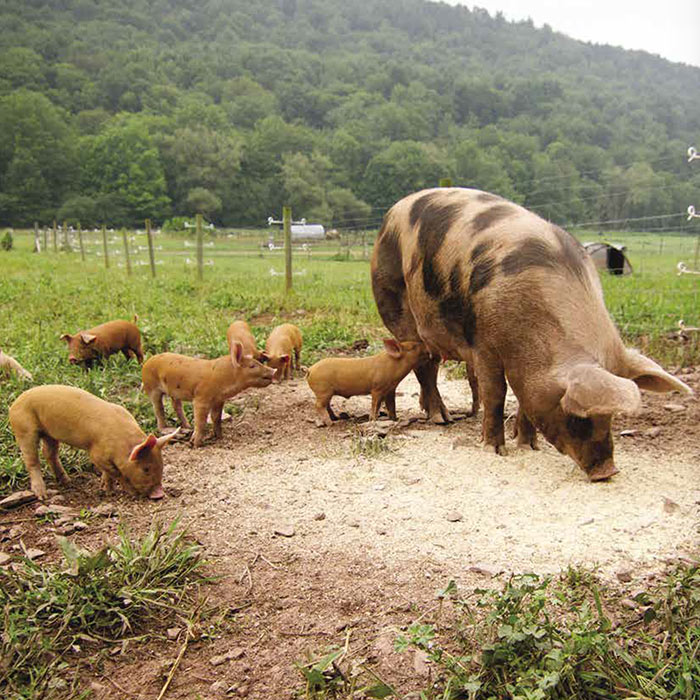 Domesticated pigs descend from forest dwelling wild boar, which root and forage for food. Pigs are omnivorous and can eat a variety of food of both plant and animal origin. Based on these two facts, some farmers assume that when pigs are given the opportunity to forage they need little or no supplementary grain and protein feeds.

Unfortunately, this assumption is wrong and, in some cases, has led to poor pig productivity—and even health and welfare problems. While alternative and foraged feeds can play a nutritional role at certain stages of a pig’s production cycle, they will rarely meet the pig’s full dietary needs and supplementary feed is still essential.

The Certified Animal Welfare Approved by AGW (AWA) standards require that pigs have access to a ranging and foraging area. If the ranging or foraging area is well managed and/or the pigs have access to good quality forages, it can provide some of the pigs’ dietary needs and therefore reduce the need for expensive grain and protein supplements. However, any reduction in supplements fed will depend on the age and stage of production of the pig—and must be considered carefully.

Dry sows (pregnant sows) can eat a lot of feed each day, and the nutritional goal is to maintain body condition while ensuring sows do not get overfat. A crude protein level of 13–14% and energy of 12–13 MJ/kg is sufficient for these animals. Dry sows are therefore a type of pig where the potential to replace some supplementary grain and protein feeds with alternative feeds is relatively high.

Lactating sows, however, have a much higher demand for both protein (17–18%) and energy (13.5–14 MJ/kg), as do newly weaned piglets (protein 20%, energy 14 MJ/kg). These classes of pigs are far more likely to require supplementary grain and protein feeds in order to optimize their growth and production levels and to maintain health.

If pigs have been well nourished during the immediate post-weaning and growth stage, the finishing period offers a further opportunity to once again utilize alternative feeds and reduce supplementary grain and protein feeds.

In order to maintain pig growth and health, farmers should have a good understanding of the protein levels found in different kinds of feed. However, it is equally important to be aware of the types of protein—and the specific amino acids—that are present.

Pigs need the essential amino acid lysine in their diets. Lysine is described as “essential” and, as it cannot be synthesized in the body, the pigs’ needs must be met from the diet.

Lysine is essential for lean growth. If the pigs’ diet is high in energy, but provides insufficient lysine, the pigs will still grow; however, they will be unable to lay down muscle and any increase in weight will come from fat deposition. (If you regularly find a high ratio of fat to meat at slaughter, you might want to examine the lysine levels in the diet.)

Feeds that are high in lysine include peas, field beans, soy and fishmeal. Whey, potatoes, vegetable waste and root crops such as fodder beet are commonly used alternative feeds for pigs but are all low in lysine. If these alternatives are fed, they must be balanced by protein supplements that include lysine to maintain pig growth and health.

Pigs need good sources of energy in their diets. Energy drives the metabolic processes that result in the production of meat (and milk in the case of a lactating sow). The survival of the piglet in the first 2–3 days of life is highly dependent on a regular supply of energy; if the sow’s nutrition is inadequate and leads to poor quality milk, the susceptibility to disease and piglet mortality rises.

Energy is particularly important at weaning time. If pigs are weaned too young or are presented with low-quality diets at weaning, they can become energy deficient. Under these situations their immune system will not function efficiently, leading to higher incidence of disease.

Well-managed pasture can reduce the need for grain and supplement for dry sows and finishing pigs by as much as 50%. Some estimates suggest that one acre of good pasture can support up to eight dry sows, or 15–30 pigs less than 100 pounds, or 10–20 pigs over 100 pounds, although time of the year, soil type/fertility, pasture quality and composition and rainfall will all affect these estimates. The way the pasture is used—strip grazing, rotational grazing or set stocking—will also have an impact on how much feed value pigs will get, and how long they can be maintained on a certain area. (The prolonged use of the same area of pasture or crops can quickly lead to a build-up of parasites and should be avoided anyway.)

It is important to note that the nutritional value of pasture will change over time, as it is either denuded, matures or is affected by climatic conditions. If pasture is used to replace part of a concentrated feed, the levels of additional supplemental feed will need constant adjusting based on pasture condition and the pigs’ nutritional needs.

Silage or baleage can also be used for feeding pigs, although these feeds are best utilized by dry sows and finishing pigs. Forages should be cut and preserved when the pasture is young and leafy, and pigs will need an adaptation period of several weeks to get the best results.

Diverse mixtures of forages will give the best results. Pig management texts from the early 20th century suggest that a mixture of grass, oats, clover, peas and turnips can help to reduce the quantity of concentrate feed needed to fatten pigs. If such mixtures are grazed, good pasture management will be essential to ensure pigs are eating the forage and not just rooting and destroying it.

Remember: Allowing pigs to forage without any supplementary feed OR feeding silage or baleage alone will not meet the pigs’ full nutritional needs. Additional concentrate feed (and any necessary mineral supplementation) will be necessary in order to maintain condition and health.

Alfalfa’s nutritional quality varies with stage of maturity and soil fertility, as well as method of harvesting, handling and storage. Compared to grains, alfalfa has around half the level of digestible energy. The more mature alfalfa is at the time of grazing or cutting, the lower its nutritional value. Alfalfa also contains tannins and sapponins— anti-nutritional factors that reduce the growth rate of pigs.

Alfalfa can be a valuable feed for dry sows, but less so for younger pigs. Sows have a greater capacity for fermentation in the hindgut that allows for greater fiber digestion and improved energy utilization. Additionally, studies at the University of Minnesota showed increased litter size and lactation feed intake when sows were fed alfalfa haylage during gestation.

Some pig farmers have access to bakery waste or similar products. While these feeds may be low cost (or even free), they will have limited feed value. Similarly, while waste vegetables such as squash, pumpkin and zucchini will be readily eaten by pigs, the nutritional value is minimal. (See box.) Such feeds should only be considered as a treat or supplement to high-quality grain and protein feeds—and never the pigs’ main diet.

Alternative feeds can make a positive contribution to the diet of certain types of pigs and at different stages of the production cycle. However, alternative feeds will rarely—if ever—meet the pig’s dietary needs in full and supplementary grain and protein feeds are necessary for efficient growth and health. It is essential to fully assess the type of feed and the type of pig before new feeds are introduced.

Farmers should never expect to completely eliminate concentrate feeds from the pigs’ diet and any reduction in their use should be planned with a nutritionist to ensure pig health and welfare is maintained. The Certified Animal Welfare Approved by AGW program requires farmers who intend to replace concentrate feed with alternative feeds to employ a swine nutrition expert to verify that any amended diets will meet the needs of their pigs.

Example alternative feeds and their contribution to the diet

Whey: If whey is available, gradually encourage the pigs to take up to 2 gallons whey per pig per day. This will reduce the amount of required concentrate feed by around 2 pounds per pig per day.

Potatoes: Approximately 6½–7 pounds of raw potatoes will replace 1 pound of barley, with additional protein supplementation required. Dry sows can easily meet their daily energy requirements from raw potatoes fed ad libitum, with a small amount of protein supplement. For finishing pigs, raw potatoes can comprise up to 25% of the diet on a dry matter basis, although performance is likely to be reduced relative to cereal diets. Potatoes should not be considered for weaner and growing pigs unless they are cooked, due to their relatively low palatability and high bulk.

How much should I feed?

Overall: As a general rule of thumb, 1 pound of feed per pig per day for every month of age works well for fattening pigs, with a maximum of 5-6 pounds depending on how well the pig has grown. This amount can be reduced if you are offering lots of vegetables or other supplementary feed, such as whey, as per the guidelines above.

Sows: Sows that are in pig and not lactating (dry) require around 4–5 pounds of feed per day. In winter, this can be increased to 6 pounds, if needed. Sows that have farrowed can have their feed increased by around 1 pound per day after farrowing (assuming she will eat it). The maximum amount depends on number of piglets, which can be up to 2 pounds per piglet reared. Remember that once the piglets are around two weeks old they will start eating some feed. This should be encouraged as it will help them when they are weaned.