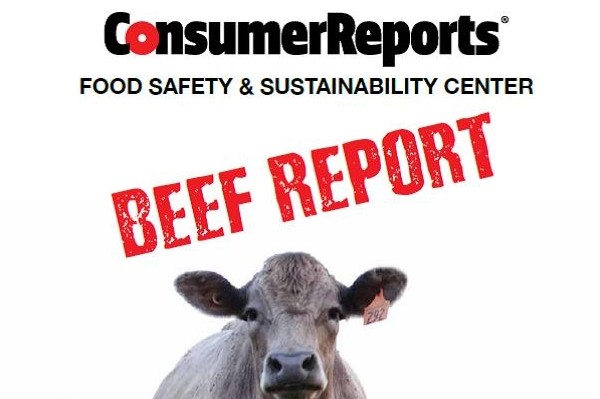 High-welfare, sustainably-produced beef isn’t just better for the animals or the planet: Consumer Reports’ recent tests on ground beef proves it’s safer for us, too.

In one of the largest like-for-like comparison test of its kind, the widely respected Consumer Reports found that conventional ground beef is twice as likely to contain potentially life-threatening antibiotic-resistant ‘superbugs’ than ground beef from sustainably-raised cattle, and three times as likely when compared to ground beef from cattle raised outdoors on an entirely grassfed diet.

Consumer Reports purchased 300 packages (458lbs) of conventionally and sustainably produced ground beef from grocery, big-box, and natural food stores in 26 cities across the U.S. The samples were tested for five common types of bacteria associated with beef—Clostridium perfringens, E. coli (including O157 and six other toxin-producing strains), Enterococcus, Salmonella, and Staphylococcus aureus. 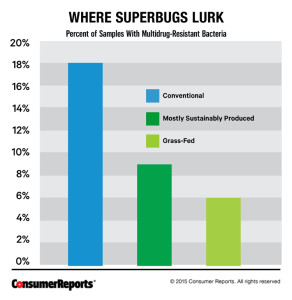 What they found (unfortunately) comes as no real surprise: 18% of the conventional beef samples—we’re talking beef from cattle finished on dirt feedlots, fed a high-grain finishing ration and routine antibiotics—contained dangerous ‘superbugs’ resistant to three or more classes of antibiotics used to treat illness in humans, compared with 9% of what Consumer Reports classifies as “sustainably-produced beef” from cattle raised without antibiotics—including organic and grassfed beef, or both. Consumer Reports also found that beef from cattle raised sustainably was significantly less likely to have two potentially harmful bacteria (S. aureus and E. coli) than conventional feedlot beef.

In the U.S., we slaughter over 30 million beef cattle every year. Most will have spent a significant proportion of their lives at Concentrated Animal Feeding Operations (also known as CAFOs) or feedlots, where thousands of cattle are confined together and reared to slaughter weight on vast dirt yards with no access to pasture or growing green vegetation. Instead, they are fed a high-grain diet designed to maximize weight gain—typically consisting of grain, corn by-products, animal by-products, cottonseed meal and a small amount of alfalfa. According to the USDA, 5% of the largest feedlots are now responsible for finishing almost 90% of all U.S. beef cattle.

Feedlots are bad for cattle health and welfare. Cattle are ruminants and have evolved to eat grass and forage, and while feeding grain makes cattle grow faster, it also makes them more susceptible to disease and causes digestive problems, such as acidosis and feedlot bloat. Research also shows that feeding a high-grain diet creates an unnaturally acidic environment in the cattle’s digestive system, favoring the growth of acid loving–and human health threatening–bacteria in the cattle’s gut, such as E. coli 0157:H7.

But instead of trying to prevent stress and illness by changing the management approach, most industrial farming operations rely on routine low dose antibiotics to try to prevent disease, resulting in the development of antibiotic-resistant bacteria. These resistant bacteria can quickly spread between animals and farms, and bacteria can exchange resistant traits with different species that have never been exposed to the antibiotic. As a result, some dangerous strains of bacteria found in the gut and on the fecal-coated hides of cattle, such as E. coli, salmonella and S. aureus, have mutated and are now resistant to multiple antibiotics.

Why should you care? According to the U.S. Centers for Disease Control and Prevention, at least two million Americans are infected with antibiotic-resistant bacteria every year, and 23,000 will die as a result. Food poisoning is a key route of infection, and ground beef poses a particular problem. Bacteria from the gut or hide of the cattle can easily contaminate the surface of meat during slaughter or processing. In whole cuts, such as steak, cooking generally kills bacteria that will be present on or near the surface. However, when meat cuts are ground, any bacteria present are mixed throughout the meat. If the ground beef is not cooked thoroughly the bacteria can cause food poisoning. In addition, one pack of ground beef can contain meat from many different animals, heightening the risk of cross contamination. If you are unfortunate enough to get infected with an antibiotic-resistant strain of these bacteria from a food poisoning accident, what was once an easy-to-treat disease can rapidly develop into a life-threatening illness.

Sadly, yet all too predictably, the multi-million dollar industrial beef PR machine and its shills are already churning out the standard response to the Consumer Reports findings: ‘So what if most of the meat on our supermarket shelves is contaminated with antibiotic-resistant bacteria? If you handle and cook your meat properly then a few bacteria shouldn’t be a problem; and if you get sick with an untreatable disease then it’s your own fault.’ But is it really right that consumers are unwittingly putting themselves and their loved ones at increasing risk of contracting untreatable bacterial infections simply for the sake of so-called ‘cheap’ beef?

Safe handling instructions for meat should exist to protect consumers from the risk of catching treatable food poisoning bugs. It should never be seen as an excuse for the intensive meat industry to continue to abuse vital medicines in ways that are known to actively encourage antibiotic-resistance, nor as a means of absolving itself of any responsibility for the illnesses or deaths that result. This is exactly the same kind of asinine mentality that thinks it is acceptable for industrial farms to continue to pollute our waterways with toxic fecal waste, pharmaceuticals and agrochemicals: “Our drinking water is treated to ensure it is safe for human consumption, so where’s the problem?” Profits must never come before public health.

At A Greener World, we believe the way we farm, the safety and nutritional quality of the meat, milk and eggs produced, and the impact of farming systems on wildlife, the environment and wider society are all interconnected. And we are delighted to see that Consumer Reports agrees: “Better ways of producing beef from farm to fork have real impact on the health and safety of our food and the animals themselves,” says Consumer Reports’ Dr. Urvashi Rangan. “Our findings show that more sustainable can mean safer meat.”

When it comes to advice on buying the safest possible ground beef, Consumer Reports recommends not one but two labels from A Greener World’s trusted portfolio: Certified Animal Welfare Approved by AGW and Certified Grassfed by AGW. Both are listed as among Consumer Reports’ most “highly meaningful” labels, assuring consumers they are buying meat produced in a safe and highly sustainable manner, as verified by independent third parties. The Certified Animal Welfare Approved by AGW label is one of the nation’s Top 5 fastest growing label claims, and guarantees animals are raised according to the highest welfare standards outdoors on pasture or range, prohibiting feedlots, growth hormones and routine nontherapeutic antibiotics. But if you’re looking for the extra assurance of cattle fed a 100% grassfed diet, only one label matches all Consumer Reports’ recommendations: The Certified Grassfed by AGW program is the only certification and logo in the U.S. and Canada that guarantees the beef comes from farms where cattle are fed a 100% grass and forage diet, raised outdoors on pasture or range for their entire lives according to the highest welfare standards, and where routine nontherapeutic antibiotics, added growth hormones and feedlots are prohibited. If you’re looking for a 100% grassfed ground beef label you can trust, Certified Grassfed by AGW is the only label that ticks all the right boxes.