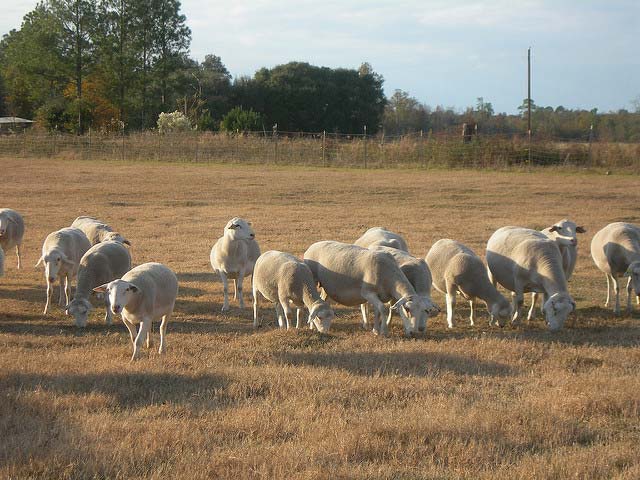 A CEO of a local hospital by day, Robin started a small flock many years ago with the sole intention of producing enough lamb to meet the needs of her family. She initially became interested in pasture-based systems because of the difference in meat quality as compared to products from confinement and feedlot systems. She discovered the superiority of pastured meats and decided to raise her own, explaining, “I felt that if I could at least provide my own meat, I would have a positive impact.”

Over time the hobby grew in scale, and what was once a small flock has now become a respected source of Dorper genetics throughout the United States and beyond.  A haired breed of sheep, Dorpers are known for their good mothering abilities, adaptation to hot climates, frequent twins, and high tolerance to parasites. Robin sums up the breed’s attributes: “They provide a very good return on investment.”

Robin decided to pursue AGW certification because she appreciates the verification of her commitment to the animals’ health and welfare, explaining, “I believe that while they are on this Earth they deserve the best care possible.”

Twelve Year-Old Farmer Is an Inspiration to Us All

Ask any farmer to list his or her major challenges and the issue of who will take over the farm when it’s time to retire will no doubt feature in the top 10. According to government statistics about 40% of U.S. farmers are 55 years old and up, raising real concerns about exactly who is going to fill their shoes. The sad fact is that there are fewer young people getting involved in farming than ever, and many young people see no future in the family farm. As a result, countless family farms are being bought up and absorbed by larger industrial operations. In my opinion this is one of the greatest tragedies of our generation. This is why Shelby Grebenc of Broomfield, CO, is such an inspiration. Shelby is founder of “Shelby’s Happy Chapped Chicken Butt Farm,” located about 20 miles outside of Denver. And at just 12 years-old, Shelby is also the youngest Animal Welfare Approved farmer to date. Shelby represents a beacon of hope for the future. Her dedication to high-welfare farming is an inspiration to all of us – regardless of age.

Blog Categories
Back To Top
×Close search
Search
×
We want to hear from you!

Can you take this survey to help build a greener world?